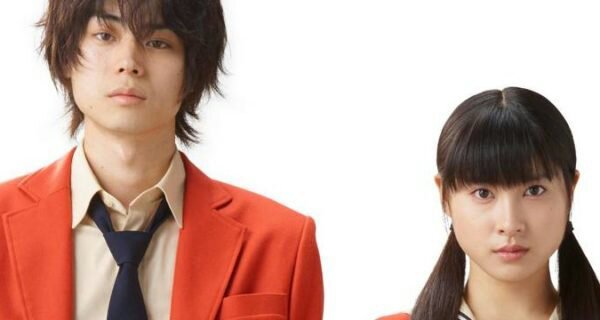 I just watched it the day before this review comes out. I could have watched it last week but my pay got delayed, so I only watched it yesterday.

This movie ran for 105mins. But it does feel like it’s longer than that.

So… you wanna kiss me or not?

Compared to the more comedic side of the anime, this movie moves towards the more serious route. They didn’t really focus a lot on comedy, but they straight away throw in with the love confessions right off the bat.

It’s nice they tried to adapt the whole manga, instead of using the anime as the baseline. Details got a lot more condensed, but it doesn’t feel rushed at all. The pacing is pretty solidly stable. There isn’t a time where you need to wait for the drama, the drama waits for you. There is always drama or comedy every 2-3mins average.

The romance isn’t all that cheesy, so it’s pretty comfortable to watch, without goosebumps every now and then. But I do wish they emphasize more on the romance and not too much on Shizuku.

The story tends to surround Shizuku too much, even Haru feels like a side-character sometimes. The rest of the cast felt like passers-by. The most sidelined characters were Chizuru and Micchan.

Asako x Micchan gets a bit of a saga in the movie, but Asako x Sohei was pretty sublime, swept under the rug. Character developments were pretty much affected because of the massive content snipping they had to do to cram everything into the movie.

The climax felt pretty weak. Wasn’t really all that entertained, I wish they could change the plot for that since they have modified a lot from the manga already.

The ending was a bit dramatic, with Shizuku doing the gravity-defying jump towards Haru to hug and kiss. Then the happy ending, rather expected, and I wish they wrap it up better, it felt rushed and abrupt.

There is mid credit scenes so take note. But the thing I want to complain about is that they shrunk the screen to do their credit roll. They could have just cut the credit roll midway and play it full screen, or maybe just throw it in as a post-credit scene since there isn’t much credits to roll.

Overall, it’s a pretty great adaptation. Live action adaptations are getting better and better, and this one is definitely living up to my expectations.

I guess he’s like me at a new school.

I do find Haru being way too ADHD and way too eccentric. Shizuku looks rather awkward at times.

Asako being the shy girl that I really love. Micchan being the coolest guy in the list. Sohei looks way too cool already. Kenji also is a little bit too cold, but lacking of the repeating gag of him constantly getting lost. Yuzan looks more like a homeless guy than a rich person. Chizuru sometimes looked way better than Shizuku, stealing the limelight.

The height difference between Haru and Shizuku is pretty similar to the manga, which is great.

Otherwise, everyone did decent, its not perfect, but passable.

Music is great. A whole bunch of Nishino Kana songs, and also the BGMs fitting the ambience nicely. Nothing really much to nitpick.

Just look at him. Hot damn.

Minami in glasses is probably the greatest creation of all mankind. She looks even better than during I Want To Eat Your Pancreas. I wish she can wear more glasses. JUST LOOK AT HER.

Elaiza looking way cuter than she was in ReLife. The departure from her typical tsundere role is a great move for her. A lot of her hidden charms are starting to show.

Masaki took me awhile for me to sink in on his role. It’s not about his portrayal, but it’s just something about him that doesn’t feel right. Tao on the other hand, I personally find not really suitable to be Shizuku. Her stare reminds me of Arnold during the Terminator movies. It’s too deadly, she needs to be more passive. Tao’s perfect element for the movie is just her short stature I guess.

Mokomichi did a GREAT job doing Micchan, he’s sinks into his role perfectly, his act of maturity is so assuring to see.

Yuki for Yuzan looks like a taller younger brother to Masaki and looked extremely homeless. Yuki for Kenji on the other hand, looks pretty solid.

Despite the flaws of being overambitious about squeezing the manga into a 105min movie, it’s still a great watch. I am totally willing to watch this again, Elaiza and Minami totally pulled me into the movie.

I really want to watch this again.

That’s it from me for now, I will see you all in the next post.