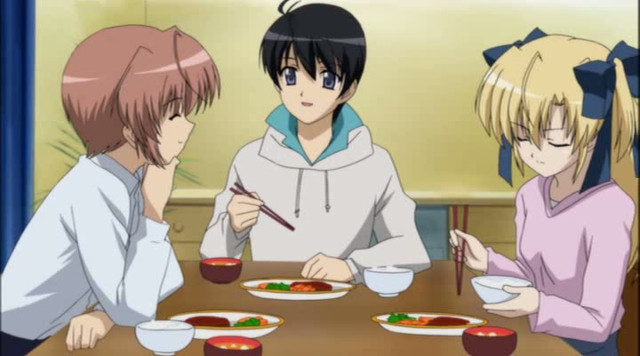 So hi, I’m going slightly retro for a bit with this one.

This is from a light novel, anime ran for 24eps. This is probably one of the weirdest ending anime for me, especially from Yoshida Reiko’s composition.

The story started off pretty normal, but most regular viewers would find this rather boring.

The pacing is questionably slow. I watched it back in 2006 and I had lots of patience back then, but I think the ending was rather rewarding. The pacing never really picks up until 3/4 of the whole season, and the climax was a bunch of question marks.

Like why Hiroki ended up picking a school girl over a childhood friend. I really question why this guy isn’t arrested. Especially when they moved to Paris. Like what kind of show  am I actually watching during childhood?

As a kid back then when I watch it, it looks like a weird happy ending, but now, it’s just straight up weird. This turn of events will probably turn people off. For me, I don’t hate or like it, I just find it straight up weird and illogical.

The questionable ending aside, the story was not all that bad, even though the slow pacing bogged down character developments of the story. I guess this show could have been better if it’s shrunken down to 13 episodes. Just condense the plot, and it will probably do the trick.

Animations by Zexcs, back in their golden ages. Character designs were great, very Zexcs-like that I have always loved back in the 2000s. Colors are on the bland side, ironic for a show talking about art. It’s a 2005 show, but it doesn’t have a Bluray version, so expect this show in it’s 576p days.

Music is rather decent. I love the OP and the ED is actually great. The BGMs are soothing too. Really loved Yuria’s singing of the OP, loved her since Shuffle!, and I love her more in this one. The ED is totally unexpected to be honest.

I really wonder why Hitomi keeps getting those roles when she gets sidelined badly at the end, or even the one that is supposed to get the happy ending, but ended up being the losing one. The rest did great at their roles.

Recommended? Not really, depends on how you can accept that ending. The ride is okay, just the ending that will raise some eyebrows.