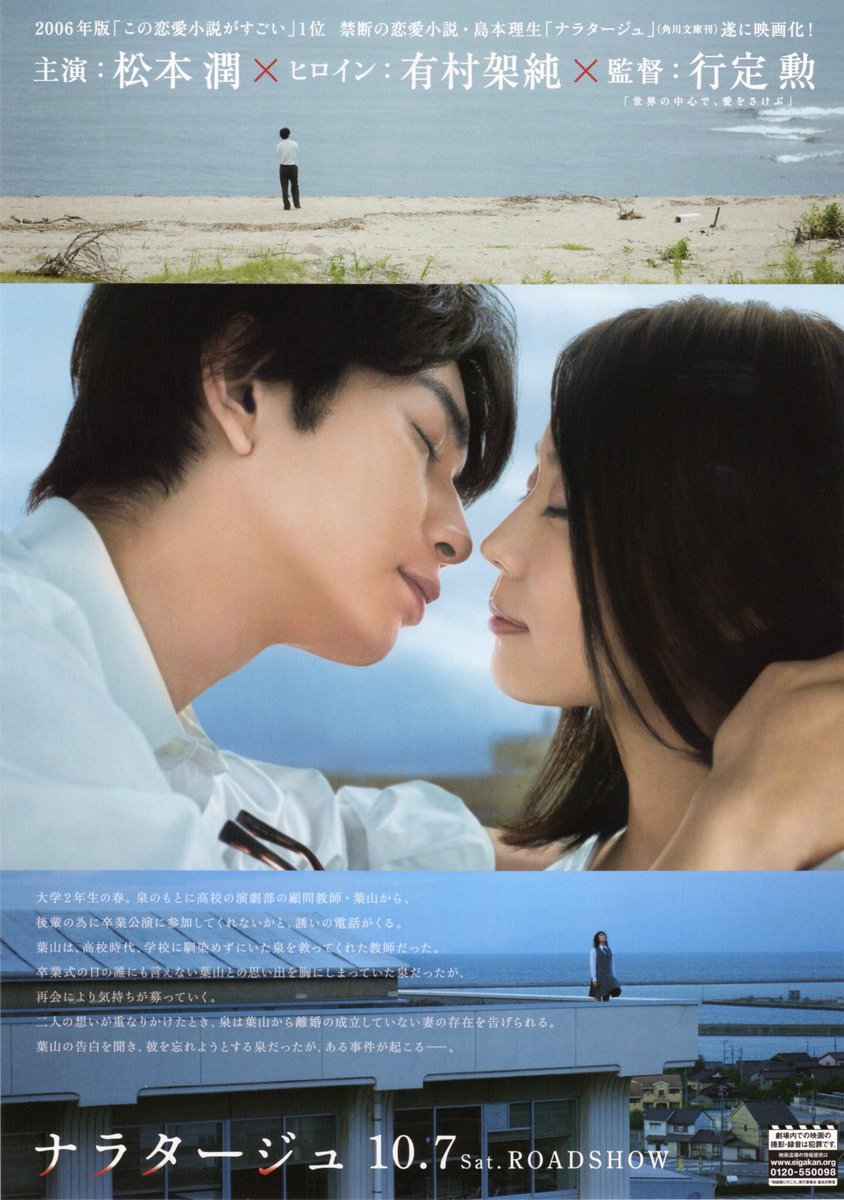 Heyo, its been awhile since my last live -action movie and this one caught my eye.

This movie lasted for 140mins, so its rather long, so better make sure you are awake before entering the cinema as it can be rather slow.

A lot of spoilers are inbound. So beware.

The story starts off with an adult Izumi, working at a film distribution firm, overnight and raining. Then a guy who was kind of obvious to have a crush on Izumi entered the office and yadayadayada, Izumi goes into flashback mode.

The main story is pretty much in the flashback, and unexpected it, she flashes back to Uni year 2, instead of high school. I really love how the story develops and the forbidden romance slowly uncovers. The romance is very subtle for the first hour. Pacing has been pretty slow, pretty serious. Stuff gets very serious after Izumi decided to date Reiji.

How serious? So serious that the plot twists became extremely awkward. Like for example? When Izumi gets a late night phone call from Takashi, and Reiji questions about it. At first, Izumi didn’t answer, making the atmosphere awkward enough. He then took Izumi’s cellphone and checks the calls logs, something that a girl would do. I’m not sure they are trying to portray Reiji as very insecure and delusional guy or it’s just the way it is. They could have played it off with Izumi answering saying it was someone else or just be honest and admit. But this kind of caused a chain of awkward plot twists.

One night, Izumi was on her way home, but she gets stalked by a old geezer with a luggage. She finds a safe place, she calls Reiji for help, but Reiji asked instead, “If I pick you up, will you love me even more?” I facepalmed, like how insecure can this guy be.

With Izumi trying to be apart from Takashi and spend more time with Reiji, things took a bad turn after a kouhai from the drama club decided to commit suicide. They eventually meet again at the hospital, causing another spark of conflict. Then another plot twists ensues.

Izumi walks back to the hospital barefooted, the kouhai dies and Takashi chooses to reunite with his wife after what she did to his mom. Which pretty much revert everything back to square one, Heroine Shikkaku Part 2?

The story felt nice until the near ending with everything going back to normal, making the journey felt like a waste of time. The climax does have some highs but not as high as I expected, but it was deep enough to bring some regrets. Pacing throughout was pretty slow, people with short attention span probably cannot handle it with its rather long 2hr 20min runtime. Ending was abrupt and inconclusive so one can only speculate, but I think its a happy ending. I was hoping for some teacher-student romance ending, but I’m disappointed.

Music is great, but the BGMs are rather minimal throughout the movie, so sometimes expect some absolute silence between pauses in dialogues.

The cast list is great. Matsumoto Jun from Arashi, Arimura Kasumi, Sakaguchi Kentaro leading the charge. I watched the movie for Arimura Kasumi and Sakaguchi Kentaro, and Kentaro’s casting wasn’t surprising, because so far his movie roles are either the rejected one, the cool one or the third wheel. He is a third wheel this time, but his insecure personality gave me surprise and brought him into a new light. Overall, the casts are still great.

Recommended if you want a romance with no cheesy undertones. But be warned, make sure you have an extremely long attention span, ’cause 2hr 20mins is really long with the slow pacing.