Herro, time for a pretty nice game post. I combined both of them because they consist of something that only these 2 games have, Hack and Slash. These games are pretty welcomed because of the repetitive nature of RPGs and their slow paced action. Some hack and slash is good. Changing of pace is always good.

When this game was released, it proved its point because the game became more interactive due to its really “Dynasty Warriors” style hack and slash and the combos became very satisfying. Maybe because I’m a sadist.

Storyline doesn’t link to any serious from the Re:Birth parts but this one is precedes to VII. The storyline doesn’t have a sequence whatsoever, it just quests everywhere and just level up accordingly. Maps expands after completing some quests. Its pretty simple but the combos is just extremely satisfying. Until eventually after beating all the quests, you get to fight the final boss. One flaw about this game is that the amount of quests are pretty little and I took little to no time to finish the game, and also the quests are pretty damn easy. These flaws slightly ruin the experience but at least there is a super hard final boss and lvl 99 quests so… yeah.

Graphics is about the same level as R;B 2 with minimal graphic settings. Even with max settings, I managed to play it at smooth 60fps. 60fps is the limit, no matter you turn on or off your Vsync. Interface is pretty ok, its mouse friendly and the

Music pretty much copy pasted from the other series, I’m not complaining, its still pretty well done. 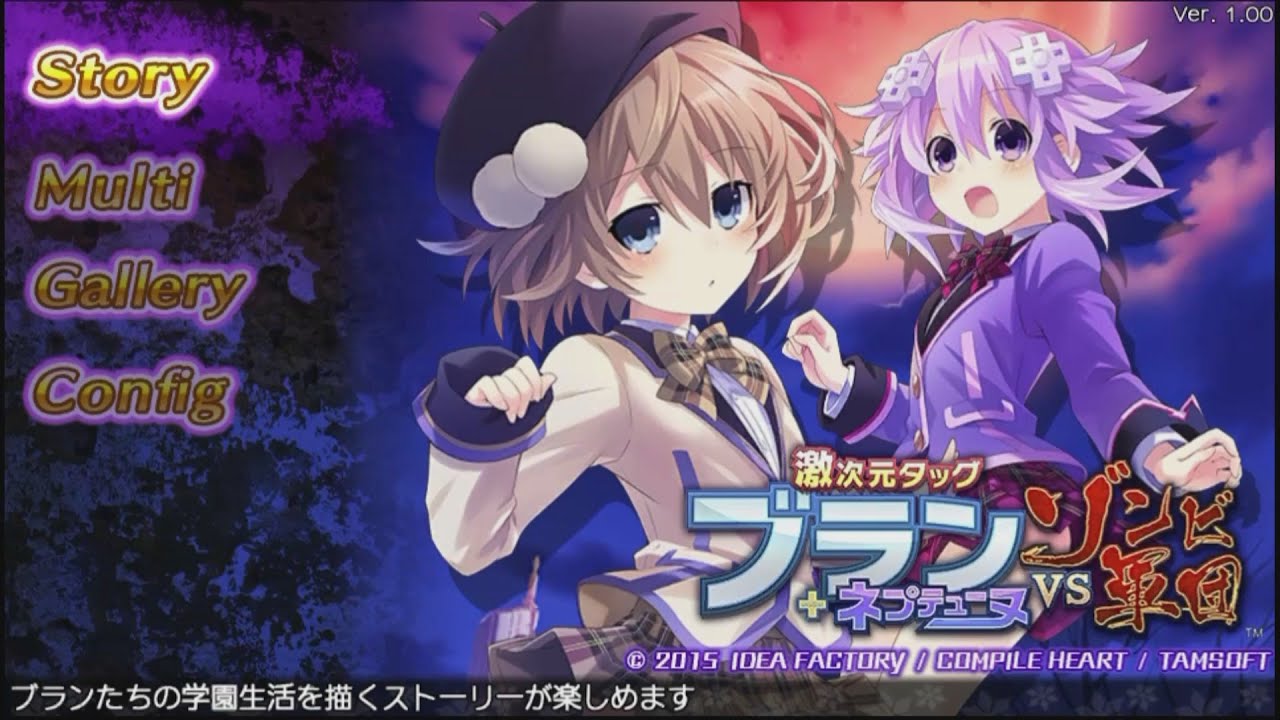 This is the latest Neptunia game of the series, this time Blanc is the protagonist. Its another dimension, where all the characters are just high school students.

Storyline is better this time, it goes by sequence and the difficulty has went up too. But the story is still equally short and I finished it in a day or two. But worry not, this game offers multiplayer and multiplayer quests are different and way more difficult than the story quests. This expanded the game a lot. Zombie fighting meets Yuri Moe, this combination feels new. The fighting feels a bit boring in this game because on some maps, because its tight, variable camera angles tend to be a hindurance to the fast-paced fighting.

Interface looks pretty decent, but it feels like a backwards step as the mouse support has dropped a lot and you need to press keys which is a chore because their keys are controller keys. Graphics side, it feels like R;B 2 also, but will slightly more graphical options. The game is unnecessarily heavy for some reason. Extremely lengthy loading screens everywhere and quite buggy too, sometimes my laptop cannot hit 60fps, I don’t know why, its definitely not my laptop’s issue because I can play many games in High settings.

Music is still the same, but maybe some additional BGMs to fit the new atmosphere.

VAs are pretty much the same, with Dengekiko and Famitsu, we add a new character, called Tamsoft, voiced by Koshimizu Ami.

Both are recommended, especially if you are sick of the slow and repetitive gameplay from the other Neptunias.

They have Firefox and Chrome extensions so that you can listen in the background, and dont need to stay at their site. But if you are as hardcore as me, you can get the Windows client. But you need to join their Discord to get it.

If you have music that they don’t have, request upload access (Which may take a few days, maybe weeks, depending on them. Process can be shorten by joining their Discord.) and then upload! Easy. After uploading, it will take a few more days of waiting for them to review your uploads before approving.

One response to “The Mirror Plays Hacku and Slashu: Hyperdimenson Neptunia U: Action Unleashed and Megatagmension Blanc + Neptune VS Zombies”