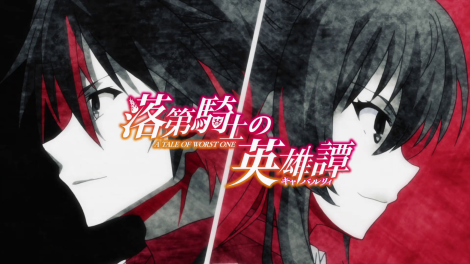 Heyo~~~ It’s been awhile since I did a comparison post. I have been planning to write this but I forgot. Tee hee~

These 2 shows cause quite a stir and a big comparison war during Q42015 because of its incredibly similar and generic introductions and near identical premise, and both of them started airing at the same season.

How are they similar?:

How are they different?

etc etc, too many to list. I’mma just write them accordingly.

To be honest, I was not really a fan of Ono Manabu’s works. I don’t like his execution on Mahouka, but A-Channel is pretty decent. I was pretty wary of this show when it aired, but pretty much gave it a try.

Storyline feels intriguing at first during the intro. But stagnancy drags for a few eps before the “actual” action begins and then stagnant again. The battles does not feel exciting at all because they rely on spells and ranged attacks so much that there is very little physical contact. Going through 12 eps was pretty much hell, and they they announced a 2nd season mid cour and I decided to go thru with it, since I watch the 1st season after all. 2nd season was another piece of hell, WHY? More confusing and irrelevant characters, newbie voice actress with that nasally irritating cute voice. I think I hate the 2nd season more, I have never seen a tournament this stagnant before and so minimal action. To wrap it up, it was just hell. Ozawa Ari’s voice is 2nd more irritating, her character can go from cute voice to rough in a matter of seconds, it may sound like she have a wide vocal range, but her voice transition make it sound like either a different personality or a different character. Ending is still the going to nowhere one, which makes my effort to watching this 2 cour hell meaningless. The harem plot is slowly killing the show too. This also lead to a stagnancy to character development. Oh yeah, I thought he was looking for his sister? Where have we gone to? It’s like One Piece…We lost our main purpose of watching the show. Story pacing is pretty ok at the start, but it gets slower during tournaments to drag the episode count, which bores me out. Standard battles can last like forever even though it’s a easy fight.

Animations by A-1. 1080p feels so upscaled and the combat scenes felt uninspiring. They spent too much effort on the transitions, OP and ED animations. Colors felt vivid at first, but slowly becoming more and more dull. Well, not surprised from A-1, they are always that unstable, like how they botched up Nanoha Vivid. Character designs are ok. What makes me wonder is why A-1 only decided to use more Live2D in S2, making S1 look inferior. But Live2D is still new so it feels a bit weird than unique. It makes physical movements look awkward even though it’s normal.

Music by Rasmus Faber, a Swedish DJ. It clicked incredibly well. I liked it. The OP1 was good, OP2 went down, and both EDs are nice.

VAs is a massive list. I’mma give you a link to Wikipedia here. It’s really too many, one of the most characters I have ever had and 80% of them are pretty insignificant. Notably Kakuma Ai, Tamaru Atsushi, Ozawa Ari etc etc.

I pretty much watch the show for Claudia, and they give me only this much. I hate this show.

I would say this one is the better one of the pair.

Intro is about 80% similar to Asterisk War, but after that they diverted to walk down their own path and thank god that’s only the similarities. Storyline from then on was a bit stagnant for like 2-3 eps until they kick off their first arc, but at least we get more romance and character development which waived off the slow moving pace. I would say they are more open and daring with their fanservice too. Story pacing is ok if you ask me, but can be a bit of a roller coaster.

This prove that they learned too much about fighting that they dunno a single shit about sex education. It’s nice that they concentrated on the romance a bit more, but they kind of neglected the rest of the characters. At least there is development. The 12 eps felt very short, and this show definitely deserves more of a 2nd season than Asterisk War. Overall, even though the ending was inconclusive, the ride feels fulfilling and development does have its twists and turns. I wouldn’t say I enjoyed it to bits, but I was entertained. Onuma Shin is managed to pull it off again.

Animations by Silver Link and Nexus. The eye-catching parts were the monochromatic skills that they do which feels rather unique and entertaining. The physical combat is definitely better than Asterisk War and Silver Link is doing the combat scenes like they always do. Character designs are ok I guess, not my type or fav but it’s still acceptable. Color schemes are decent, they oversaturated the monochrome sequences which is kinda eye popping.

Music is ok. OP was erm… weird? But the ED managed to do something. ALI PROJECT is always so… dramatic, but I like it. BGMs are fine, but lost to Asterisk War.

VAs is a pretty decent list. Long list too. Click here for the MAL list. Notably Ishigami Shizuka, Osaka Ryota, Toyama Nao… etc etc. They may have slightly lesser characters but most of them are still pretty insignificant to the main story.

I would pick Rakudai as my recommendation. Asterisk War is a waste of time with that 2cour.

8 responses to “Similar but Different: Asterisk War and Rakudai Kishi no Cavalry”