Good evening! Time to clear my backlogs by combining shows together~

This two are awfully similar, even though they are from different female mangaka groups.

So far the most similar shows I have watched for ages. Lets kick off things with some robots.

This show ran for 26eps with somewhat covered everything from the manga.

I love this show a lot, its cute and it somewhat reflects on real life too. The story is will never bore you and keeps entertaining you, even though it lacks plot twists. The pacing was ok, it pretty much flatline the entire season. Fanservice a lot but it does not deviate or affect the main story in anyway. Character developments were massive even with the separate character arcs storyline. It was never a bore watching each ep and I hope they could have deliver more. 26eps gave the show more than enough room to cover the nearly the entire manga. The ending felt pretty lackluster because I expected way more from it, judging from how the show developed during the series.

Animations from Madhouse. I managed to watch it on bluray, so the show is in HD glory. It was necessary. They did not just expand the video from 4:3 to 16:9, like most remastered shows, because it will have excessive background. They pretty much redrawn most of the frames from scratch to accommodate the widescreen format. Even though its from 2002, the animation from the original was already superb. While the widescreen made it a lot better as they refined the details, colors and backgrounds. Character designs were excellent, the girls all looked extremely cute, but not the moe-type.

Music was ok. OP was ok, but EDs were pretty bland. BGMs were excellently composed, they did their job to fit the mood and atmosphere nicely. 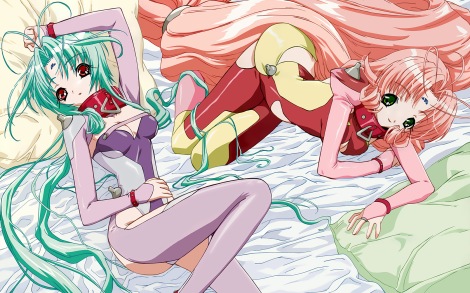 This one only had 13 eps but included an OVA. This show didn’t cover the entire manga.

The storyline started off good, with the unique setting and concept. But slowly it degraded into a somewhat-generic sci-fi harem that everyone can see everything from a mile away. It kept on degrading until its near torture to keep watching. Character developments were slow, and sometimes minimal, they keep skipping places and people will soon lost track. Ending was pretty much like an incomplete slice-of-life.

Animations from Daume, the ones that made the Onegai series a success. The backgrounds were ok, the colors was pretty vivid but the color palettes looked damn weird and the color saturation is so out of place. Character designs were damn weird, I cannot get used to it, I don’t find the girls cute, at all. Its a 2004 but it feels like it was made way back.

Music was ok, but yet again, the OP and ED was weird. Not sure because it represents any alien things. BGMs were ok.

Recommended to watch Chobits, but DearS at your own risk. You might not like how the story will pan out.

6 responses to “Similar but Different: Chobits and DearS”