Good afternoon~ Its been a long time since I written my last completed series review, its been a bit slow and hard to clear my backlogs nowadays since my laptop went into the grave when a lot of my backlogged series are still in it.

I just finished Mai-Hime a few days ago and decided to combined this 2 into one post. I have deleted the previous Mai-Otome review just to combine this 2, I have also rewatched both series, so I have a better idea now. Length warning, its going to hit 1.3k words due to the amount of girls and love and my dedication to this franchise.

Just to let you know:

Too many to list. Lets just get down to the proper part.

I was pretty turned off by the series after watching 2 eps due to its rather disappointing animation quality and also the bland and draggy storyline. I dropped the series and put it away to gather dust for a YEAR, yes, its true. Until recently I saw my backlogs and decided to give this show another chance. This time I understand the story even better and decided to marathon it, it became very addicting. Their weapons here are called Child and they are like summoned demons, the girls do have weapons with them so they dont need to summon their Childs all the time.

Storyline may take time to get used to because it throws very deep moments just at the start of the show and you will get a bit lost, but you will find your way back a few eps later, when everything starts to be back into place. The show climaxes really early but this can help boost feels that it was trying to present just before the end of the show. This help them to throw an easy happy ending also. The climax can get pretty feely with you have a pretty weak ego or a soft spot for people dying without reason and a body. Its isnt alway serious, it has its own comedic moments, and it blended in pretty nicely. 26eps were perfectly timed and paced, it doesnt accelerate hard or slow down too much, and most importantly it doesnt feel short and rushed or long and draggy, its just nice. It doesnt really drain a lot of stamina to watch the show. Overall, I enjoyed this show very much, the script was pretty well written and it doesnt really deviate away from its main plotline.

Animation done by Sunrise. Quite disappointed with the quality as Gundam Seed Destiny was airing the same year, had way better quality than Mai-Hime when both of them have intense combat sequences. Character designs are excellent, but the mediocre animation quality somewhat killed it.

Music done by the-one-and-only Kajiura Yuki, so it was excellent. OP and ED is quite ok. 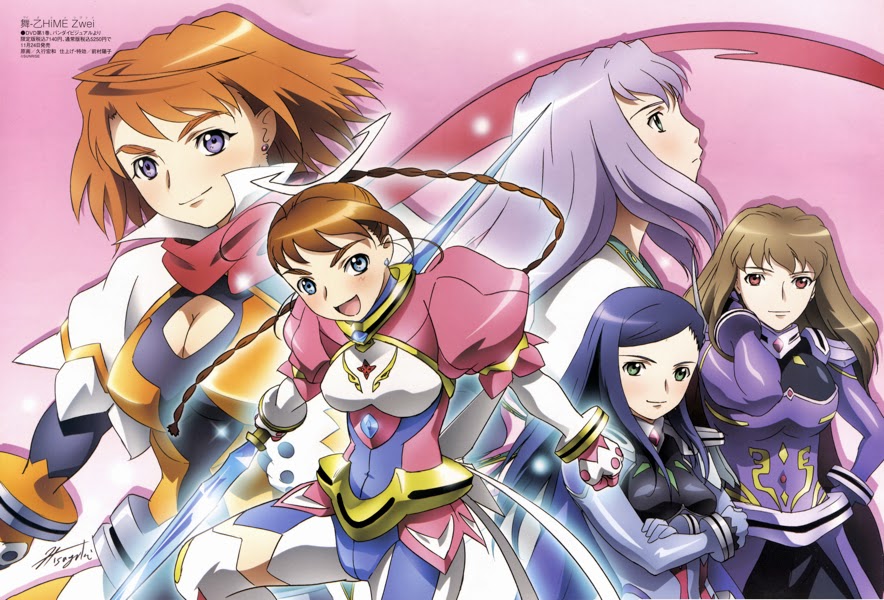 This takes place at a different universe with different weapons systems. This show is a bit more badass and its easier to comprehend compared to Mai Hime. The designs seems more elegant compared to Mai Hime and it suited the girls nicely and the nicer thing is they called their battles as “Dance”, stating that they need to fight and also be elegant and graceful at the same time. Their weapons this time are called Otomes and they wear it on as earstuds and they materializes into an armor and weapons to fight. The system only works on Virgin girls, once they *ahem*, they can never be an Otome ever again. Otomes sometimes have a bitter fate as they have to fight each other if the countries involved are having any military conflict with one another. This time Otomes are pretty much tools for their kings or queens. The sequel OVA is called Zwei and the prequel one is 0 ~Sifr~. The ‘0’ represents Zero.

The storyline is a lot more enjoyable and lighthearted compared to Hime. Comedy elements pops out more often. But the lighthearted story can make the show look less serious when it gets deep. The feels isnt as strong due to its lighthearted storyline and atmosphere. Climax is pretty entertaining as the combat sequences does intensifies and story takes a different turn as the story that what you think it is not as simple as it seems. Ending was pretty abrupt, but at least it was a happy ending so its fine. 26eps is pretty ok, pacing nice, but they lengthened the climax so much that they ran out of room to do a proper ending to the show. The wrap-up felt pretty halfassed compared to Hime. But then Otome had Zwei to continue the story a bit more, so its fine. Zwei happens 1 year after the main series and they fight new enemies. The climax is even more entertaining than the main series and the ending was well done, but it doesnt really give much answers. 4eps were excellently paced without any feeling of it being rushed. 0~Sifr~ goes back in time where it tells the story of both the MC’s mothers in the main series. Its goes pretty OP and the OP doesnt make it generic, but it makes everything even more entertaining instead. Climax and battle sequences are a bit more intense this time. 3eps is well paced. Overall, this entire series is better than Mai-Hime as its more elegant and less deep. Its also a lot more enjoyable, and has more entertaining battle sequences.

Some of the characters here are different from how they were in Mai Hime, like Midori, Haruka, Shizuru and Natsuki. It may take sometime to get used to if you treat their personalities in Mai Hime very seriously.

Animation by Sunrise again, but this time its better. The main series has better combat scenes and slightly better character designs. Zwei and 0 ~Sifr~ goes HD and the colors used is a lot more vivid and character designs is slightly revised also. Combat scenes is a lot better this time. The characters looked more attractive now compared to how Mai Hime was animated.

Music again by Kajiura Yuki. All the OPs and EDs in this entire universe is A LOT better than Mai-Hime.

Highly recommended for guys, girls can watch this one too. Even tho its an old show, but its like a hidden gem.

Ok, thats all for my lengthy post, as for the weekly impressions posts will come on Sunday as usual, if my shows doesnt get delayed or affected.