One of the most controvesial shows i have ever watched. Its a very unique concept with a rather twisted way of executing it. Its originated from a LN, the anime lasted for only 1 season of 26 eps, thank god. But to be honest, I hoped it get another season, i will tell you why later…

I dropped this for like 2-3 times, because of its weird nature of boredom. The whole series is pretty much a lengthy, dry and naggy physics lesson with a bit of bio and chem. The story was a legit landslide for the first 2 arcs, the Enrollment and 9 Schools Competition arcs, but Yokohama Disturbance arc managed to put the show back to its feet, making me love the show once again. What this show really lacks is its amount of combat scenes and it sometimes also lacks common sense. It was a long ride, but Yokohama accelerated the show, making 8 eps very short, and insufficient. The main reason i want another season is pretty much because of Yokohama, changing my impression of the show dramatically. The most annoying thing about the show is the “Onii-sama” that Miyuki keeps using, and their relationship. Even tho the author said this isnt incest, but their behaviour told me otherwise. Miyuki even called other girls brocon when she is actually one. WTF, i really hate the irony. “Onii-sama” is a very sweet honorific but the show made it look like a joke, now i dont want younger kids calling me that anymore. This show also made me kinda hate Hayami Saori, but it was shortlived, i like her again now.

Made by Madhouse. The animation quality is pretty legit, frames are smooth, CG for their magic sequences might be a little light but they are pretty all right. Colors are vivid, lines are sharp. Not disappointed, in fact pretty impressed.

Music is pretty much a mixed bag, nice 2 OPs, but the 2 EDs are pretty disappointed, the character songs too, except for Amamiya Sora’s.

Besto gurl? OMG i love Mari, but she have a boyfriend, ugh, i hope she breaks up… Oops. 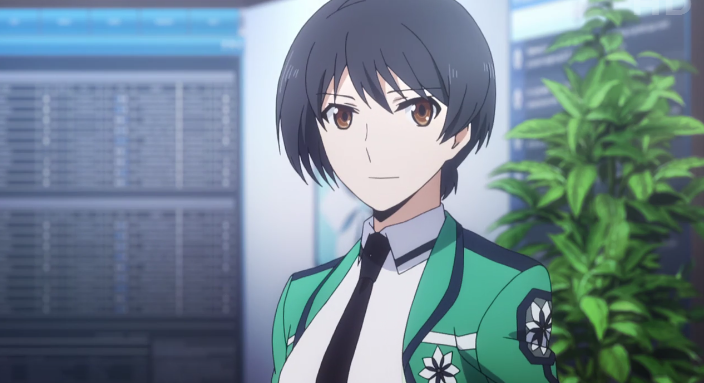 Oh yeah, a little update about the weekly eps stuff, i think i skipped too many eps that i dont think i can write them anymore, i will most probably wait for their last eps before i start writing anything. Then the weekly eps will continue next season.

2 responses to “I have no idea how to describe this: Mahouka Koukou no Rettousei (Mahouka) and a little update.”